Posted on January 14, 2016 by atticsandacres

One of the most interesting elements of any archive collection is seeing how other people go about their daily business and what things are of interest.  I was charmed to read, in a letter from William Todd to Sir Reginald Graham (1670-1728), 2nd Baronet of Norton Conyers, dated London 8th July 1712, the following “know that I have been at Mr Bull’s and he sells his best Bohea tea at 26s per lb, his best green tea at 16s, his coffee at 6s 3d, his chockolate without sugar at 3s 6d and with sugar at 2s.”

Needless to say, I was rather curious as I’d never heard of Bohea tea before, plus, I found my eyebrow raising at the option of buying ‘chockolate with sugar’ at a much lower price; the sweet stuff was no doubt more popular than the unadulterated cocoa even then.  As for tea, the initial fashion had been for Hyson green tea which became very popular, being served in many gentrified drawing rooms. Gradually, it was replaced by the darker teas, such as Pekoe (a type of Bohea), which was achieved by oxidisation.  Bohea tea was from the Wuyi mountain region of Fujian, China, where its production was pioneered by monks; Bohea being an anglicised pronunciation of Wuji. 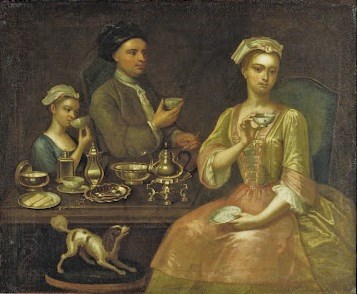 As for Mr Bull; he is Richard Bull who was a druggist and noted coffee dealer, based at the Golden Lion on Ludgate Hill, London.  On 22nd December 1704, he registered the first recorded coffee-related patent, creating ‘a new way of roasting coffee berries without charcoal, in a furnace with a case or barrel and box which preserves the volatile spirit from evaporating and secures berries from smoke and steam’.

Something seems to have gone awry a year later as in the London Gazette, he is recorded as assigning his estate, debts and effects to Matthew Wright and John Catesby, his sons-in-law who carried on with the business. There is also reference to the business moving to the King’s Arms at the west end of St Paul’s Church in Ludgate Street, but no date as to this, although I’m assuming he may have moved up the hill as his business developed.

There’s also a letter to Sir Reginald about the procurement of five lottery tickets, dated 7th March 1718;  it seems things haven’t changed that much at all really…