The Mint and a Master

Posted on April 8, 2016 by atticsandacres

Today’s interesting blog has been written by one of the wonderful Attics and Acres Project Volunteers: David Milner.  Thank you David!

At the end of the thirteenth century, the Royal Mint was housed in a purpose-built facility in the Tower of London where, by the middle of the 14th century, nearly all minting was carried out.  The role of the Moneyer (a position in existence since the mid seventh century) evolved into the Company of Moneyers who claimed the sole right to strike coins, although the quantity of bullion to be coined was decided between the King and the Master of the Mint, a position created c.1472.

In 1696 the Royal Mint was charged with re-coining old silver coins, a huge task which necessitated branch mints to be established in Bristol, Chester, Exeter, Norwich and York. The place of origin for the new coins was indicated by using the first letter of the town where they had been produced. Roses on the obverse indicated the silver was mined in the West of England, while plumes indicated it was sourced from Welsh mines.

Small change was struck in silver, such as the tiny farthing of Henry VIII, or were made by people cutting penny coins into halves or quarters. (1)  Merchants had their own tokens made and private individuals were sold a Royal patent allowing them to strike and circulate farthings.  In 1672 copper farthings and halfpennies were struck by the Royal Mint.

After the union with Scotland in 1707 the Royal Mint briefly joined with the Edinburgh Mint and produced coins for Great Britain; there was not enough work for both and so the Royal Mint continued alone.

In 1797, the steam-powered mills and presses of the Soho Mint were contracted to strike copper penny pieces and two pence coins as the Royal Mint was unable, and the Moneyers unwilling, to produce enough small change to meet the needs of the Industrial Revolution.

Sir Henry Slingsby (1620 -1690) was the third son of Sir William Slingsby of Kippax, both of whose papers are held within the Graham Collection. Henry was educated at Oxford University and was appointed deputy Master of the Royal Mint to Sir Ralph Freeman in 1662. He was elected an original member of the Royal Society in 1663 (2) and in 1667 he became Master of the Mint. The idea of stamping the inscription “Decus et Tutamen” (Glory and Defence) around the edge of coins to prevent clipping is attributed to Slingsby, although the actual idea had come from his good friend John Evelyn. 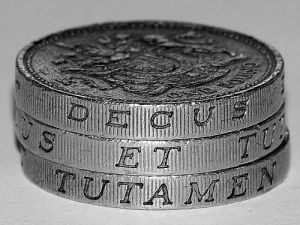 References in the diaries of Samuel Pepys and of John Evelyn indicate that Henry Slingsby and his wife, Ann Cage, held a high position in London society and the Royal Court. However, this situation changed in 1675 when he was expelled from the Royal Society for ‘non- payment of dues’ and c.1677 the accounts of the Royal Mint were investigated. In June 1680 the accounts were found to be faulty and the King ordered Slingsby to be suspended as Master and Worker of the Royal Mint. The collection actually contains a letter written by Slingsby to King Charles II asking to be re-instated. The fact that he was dismissed from two august and venerable institutions indicates something amiss with Henry and/or his situation at that time.

In August 1680 Slingsby’s house and goods in London, Longstowe and Burrough Green were seized on behalf of the King in lieu of money missing from the accounts.  The duties of Master were carried out by a commission until Slingsby’s resignation in 1686. He eventually admitted that he had passed the accounts without having seen them.  Although he was probably not involved in embezzlement it did not absolve him from gross carelessness or avoid a sad conclusion to his life. He died, a debtor to the King and others, in 1690.

(1) Henry VIII reduced the silver content of his coins to pay for foreign wars and his extravagant life style. They contained more copper than silver and as the coins wore down the copper shone through his image, earning him the nickname of ‘Old Coppernose’.  Elizabeth I ordered all old coins to be remade using fine silver with the face value of the coin, equal to the value of the bullion it contained.  This was nominally the case until the 18th century when silver and gold were more valuable as bullion than as coin.

(2)The first ‘Learned Society’ was formed in 1660 following a lecture by Christopher Wren. It received Royal approval in 1663 and published its first journal, Philosophical Transactions as well as Hooke’s Micrographica, the first illustrated microscopic study to be published. (Hooke was a founder member of the Royal Society and a contemporary of Sir Henry Slingsby)

1 Response to The Mint and a Master