Posted on December 4, 2015 by atticsandacres

This week, work has been continuing on the same elements as mentioned in last week’s blog, with volunteers busy flattening and organising many of the Norton Conyers estate vouchers which give a wonderful overview into the goods and services purchased to ensure the smooth running of an estate such as this.  The general upkeep of such a property and the cost of maintenance is one of the main areas represented and is responsible for considerable outlay each year.

This in part mirrors some of the work I’ve been doing in identifying material for project volunteers to transcribe remotely.  One document, eight pages in length and dated c.1640, provides in great detail, an appraisal of repairs to be made to Nunnington Hall and its associated buildings. One page, shown below, details the areas of concern for the mill – the use of the opening phrase ‘The decay of…’ features prominantly throughout the whole document and one can imagine the then owner, Humphrey Thayer’s heart sinking on reading the long list of dilapidations needing attention. 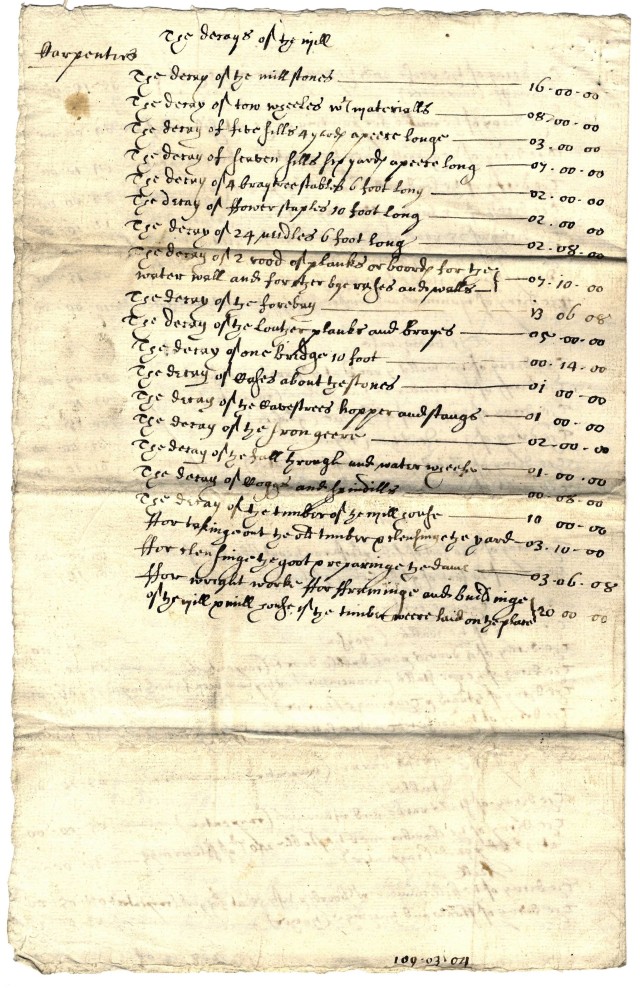 The most expensive item on this list is the work to be done to the mill stones themselves. £16.0s.0d equates to approximately £2,548 in today’s money. Although it’s not clear if labour costs were included or to be added.

It is documents such as these which give a real insight into the day to day problems encountered by seventeenth century folk and enable us to sympathise as the same type of issues are an ongoing occurence for us too. Although not everyone will have a mill in their back yard!

See you next week and hope you’re not too bogged down with your own DIY projects.

What’s in a name?

Posted on November 27, 2015 by atticsandacres

The papers of Sir Bellingham comprise letters written to him relating to estate matters and financial affairs including one relating to his son, also called Bellingham, who seems to have become embroiled in a potential blackmail scenario by a young lady, whilst engaged to Miss Emily Cottam.  What was initially odd about this letter was the fact that Sir Bellingham married a second time, to a Miss Harriet Cottam.  In effect, Sir Bellingham introduced his son to the sister of his daughter-in-law. Most confusing! 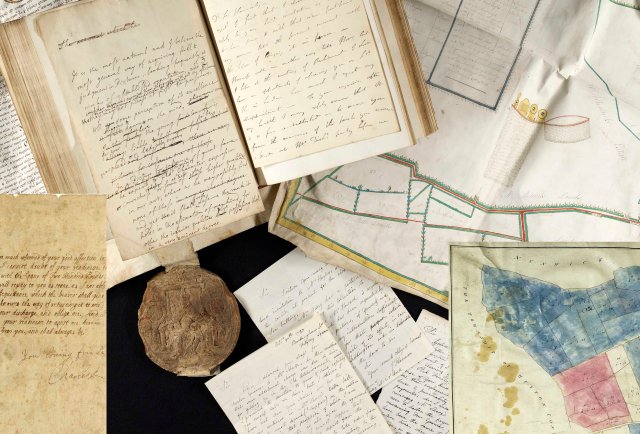 Sir Guy’s papers mostly relate to the Norton Conyers Estate and contain Estate Vouchers which are and invoice plus receipt attached together. As well as the usual bills for goods and services, there are agricultural returns, war damage contributions and licences for bearing armorial arms, owing a dog and employing a game keeper and man servant.  What is somewhat disconcerting is that the cost of the licence for the manservant is the same as for owning a dog, which seems rather unfortunate. In later years this was amended so that you could own two dogs for the cost of employing a manservant.

Lady Katherine’s papers offer a different insight as they mainly comprise letters received by her sons Richard, later 10th Bt, Alastair, Patrick and Jeremy. The letters from Richard are a fabulous source in understanding the educational process at Eton and Cambridge in the 1930s, including its cost – he seems to have had a most sober time of it, or rather, kept such things hidden from Munty, as Lady Katherine is affectionately known.

Looking forward to sharing further insights with you next week!

Posted on November 19, 2015 by atticsandacres

Hello! And welcome to the Attics and Acres Project Blog. My name is Maxine Willett and I’m the Project archivist working to make the Graham family papers of Norton Conyers accessible to all, with the generous help of volunteer support. We’ll be using this blog to update you on project progress and to share with you the exciting discoveries we’ve made.

The papers relate to the North Yorkshire estates of the Graham family at Norton Conyers, located just outside of Ripon, as well as those at Nunnington, together with records from estates at Kippax, West Yorkshire and Bowland, Lancashire.   The archive is therefore significant for the history of both North & West Yorkshire. There are a small number of medieval deeds, but the majority of the papers date from the 16th to the 20th century and the collection is particularly rich in 17th and 18th century material.

Extensive personal papers and correspondence give a clear insight of Graham family life through the ages. Other notable records include papers relating to the purchase of the estate in the 1620s, a fine Pickhill survey of 1765, early 18th century court rolls and the Grant of the Manor to Sir Simon Musgrave, 1574.  An autograph album contains letters from Lord Byron, Sir Joshua Reynolds and Jefferson Davis. Other notable manuscripts include a letter signed by Charles II, whilst in exile, requesting a loan for £200. Did he ever pay it back I wonder…

Nunnington, near Helmsley, another very important North Yorkshire house, now a National Trust property, passed to the Norton Conyers branch of the Graham family in the mid 18th century and remained in their ownership until 1839 when debts forced its sale. Surviving documents include rentals, details of renovations, court rolls of 1632 and 1639 and title deeds from late medieval times onwards.

The Kippax Manor records include court rolls from the time of Henry VIII, plus later colliery accounts and Slingsby and Cage family correspondence.  For properties in Bowland there is an important group of rentals, accounts and letters from the earlier part of the 18th century.

The project provides an exciting opportunity for exploring the heritage of the region’s landed estates by making this untapped resource accessible to the public through outreach events and exhibitions, thus encouraging people to learn about, and celebrate, their own local heritage and its relevance in the national sphere.